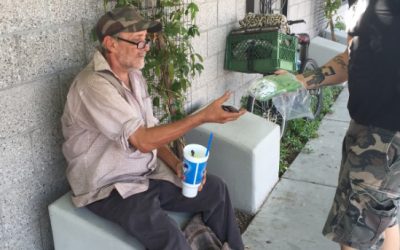 When we met Ken he told us about how his wife passed away and he went into a downward spiral. He started drinking, he lost his job, his house, and before he knew it was on the streets. He has been on the streets for a couple years and now is sober and in his spare time he creates art and gives his drawings to children.

END_OF_DOCUMENT_TOKEN_TO_BE_REPLACED 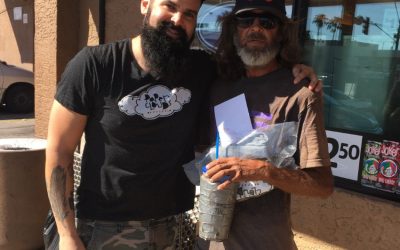 When we met Steve, we gave him a new shirt, new pair of socks and toiletry supplies. He said he could not remember the last time he had a new toothbrush. Moments like that meeting with Steve made me realize how important these things we take for granted are for those who are living on the streets.

END_OF_DOCUMENT_TOKEN_TO_BE_REPLACED 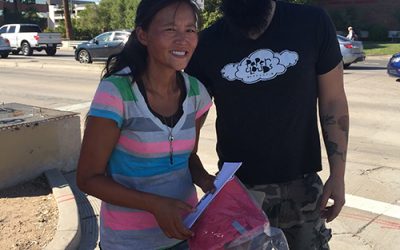 Denise was so soft spoken and almost embarrassed that we were giving her a new shirt, new socks, and toiletry supplies. She kept on saying "Thank you" over and over.

END_OF_DOCUMENT_TOKEN_TO_BE_REPLACED 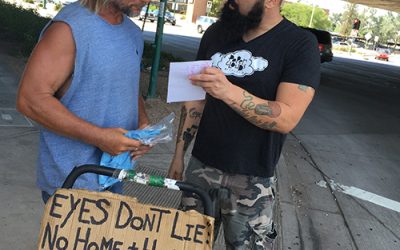 Steven was one of the first people we met when hitting the streets. He is very kind, thoughtful, and articulate. As his sign says, he is never drunk or high, but homeless and hungry. The next time I saw him I called him by his name and his eyes lit up. Who knows how long it has been since someone remembered his name and addressed him with it. We have seen Steven four times now and the last time when I reached out to shake his hand, he pulled me in for a hug. A HUG !!! Made my day !

END_OF_DOCUMENT_TOKEN_TO_BE_REPLACED 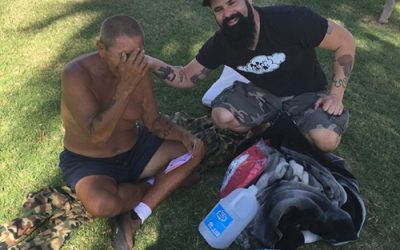 We came upon Daniel in the park and when we gave him his new shirt, he told us that all his clothing had been stolen a week ago and at that time he did not even own a shirt !!! We spoke for a little about tattoos and he put his head in his hands and started crying because he couldn't believe we were giving him a new shirt and that we cared about him.

Ready to get involved?