October 14, 2015 was the first day I went out on a street mission to help those experiencing homelessness. I was always driving around town running errands for my other business, Paper Clouds Apparel, and every day would see individuals holding signs asking for help, most of the time wearing shirts that were dirty or falling apart. This first venture I was with my friend Brie, and had a large stack of new t-shirts printed with the Paper Clouds Apparel logo, and a stack of hand written letters of hope, notes filled with encouragement. I had no thought of beginning a nonprofit, I was just going to hand out positive letters and new shirts. Daniel was the third person I met that day, and he changed my life forever. When we approached Daniel he was sitting in the park and did not have a shirt on. I approached him, shook his hand and we exchanged names. I then handed Daniel a new shirt and letter of hope. Daniel took them and then placed his head in his hands and began to cry. I asked him if he was ok, and Daniel told us that everything he owned was stolen a week ago, and he didn’t even have a t-shirt to his name. Hearing that inspired me and I realized I was going to do something to help those in need.
In May of 2016 Cloud Covered Streets received our 501c3 nonprofit status. When I was out on the streets, our goal from the start was to develop friendships with the people we helped. I always tried to make sure everyone we met understood that we cared about them.
One of the questions I would always ask was: “What is something you could really use?”
The most common answer was “A shower.”

Their answers started over a three year project to bring them what they need. I researched and found others who were bringing showers to the streets, but they hadn’t combined other resources like a laundry machine, so they would shower and then put back on dirty clothes. We wanted to do better. Along the way we had multiple construction and fabrication companies promise to help our dream come true, only to disappear when needed. So we decided to build it ourself. We bought an empty 22 foot cargo trailer, and with the help of a couple friends, and a couple local businesses, we completed the build of our first mobile shower/laundry trailer in March of 2020. The COVID-19 pandemic caused a delay in our launch, but soon we will be out on the streets and helping those experiencing homelessness.

Cloud Covered Streets is not going to stop with one trailer.
We understand that homelessness is an issue all over the United States and we want our trailer in every city where there is a need. Thank you all for learning about Cloud Covered Streets and we hope to hear from you, have you volunteer at a trailer, or maybe even lead up a street team. Thank you for your support. Without your time and donations, none of this would be possible. Have a beautiful day. 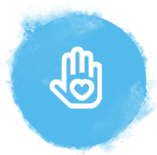 Ready to get involved?